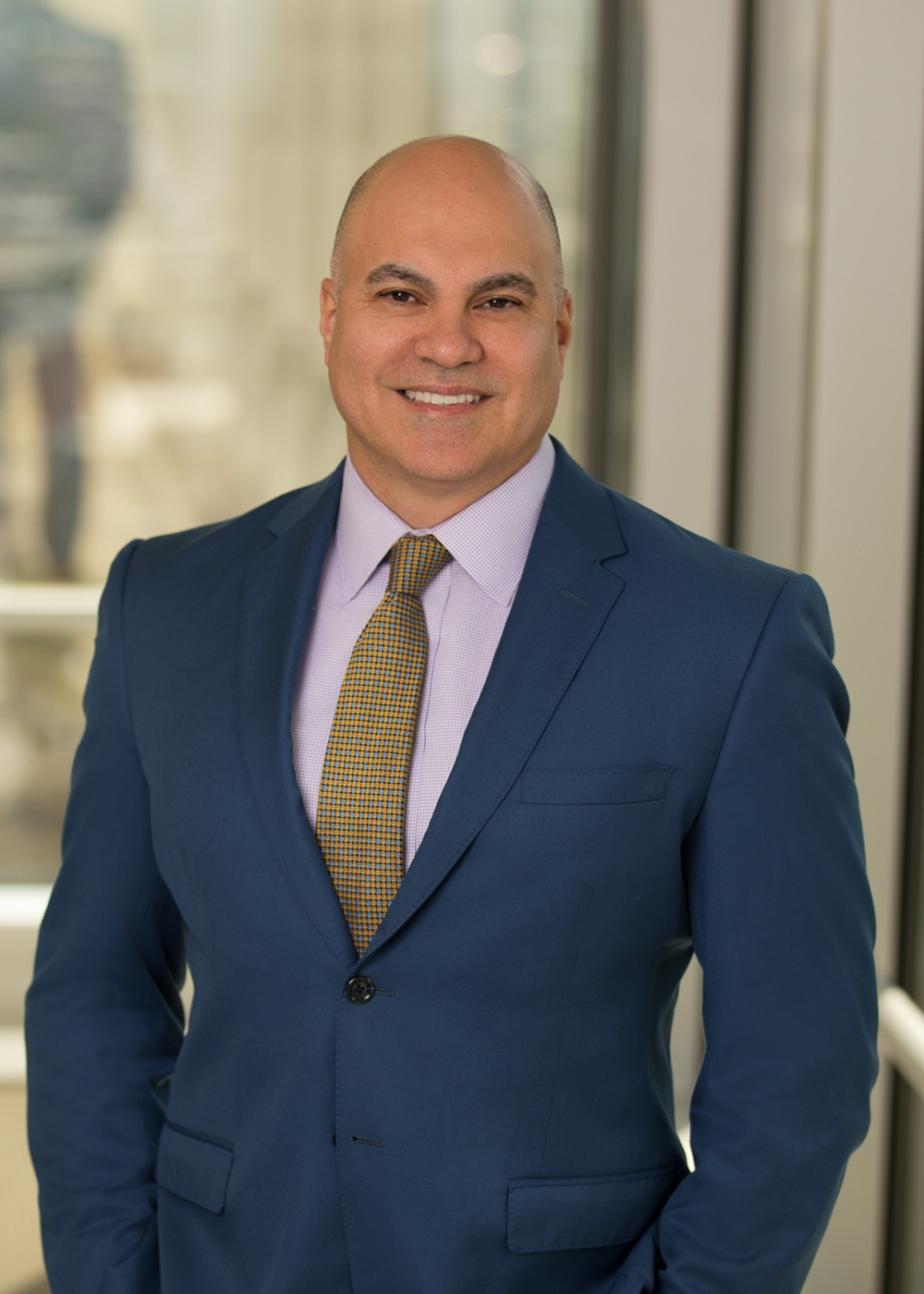 Mr. Colmenero has extensive experience in litigation and practices primarily in the State Tax Controversy and Litigation and State Tax Planning areas. He represents individuals, closely held businesses, and large corporations in all forums for Texas tax litigation, including the State Office of Administrative Hearings, District Court, the Court of Appeals and the Texas Supreme Court. He has also represented clients in IRS audits, appeals, and litigation in the United States Tax Court, Federal District Courts and the United States Court of Federal Claims, U.S. Courts of Appeals and the United States Supreme Court.

Through the course of his federal tax practice, Mr. Colmenero has represented taxpayers in complex and contentious federal tax matters through various stages of examination, appeals and litigation, some of which have involved high profile taxpayers and high profile legal issues. Representative matters include constructive dividends disputes, accumulated earnings tax assessments, hobby loss, passive activity loss and Section 465 challenges by the IRS to loss deductions, digital currency characterization issues, employment tax disputes, penalty assessments, assignment of income claims, statute of limitations disputes, trust fund assessments, partnership adjustment disputes, refund claims and voluntary disclosures to name a few. Mr. Colmenero has also represented taxpayers and partnerships in proceedings falling under the “TEFRA” provisions of the Internal Revenue Code and has been actively involved in speaking and drafting comments on the new federal partnership audit rules recently enacted into law by Congress. In September 2017, Mr. Colmenero testified before the IRS and U.S. Treasury on behalf of the Texas Society of CPAs on recently proposed regulations addressing the new partnership audit rules.

Mr. Colmenero was admitted to practice in Texas in 1997.

North Texas Chapter of the American Academy of Attorney-CPA's... [ read ]

"Recent Developments in Texas Tax Could Help Improve The Bottom Line For Many Taxpayers"... [ read ]

"Recent Developments in Texas Franchise Tax Could Help Improve the Bottom Line for Many Taxpayers"... [ read ]

"Recent Judicial and Administrative Developments in Texas Tax Could Help Improve the Bottom Line for Many Taxpayers"... [ read ]

"The Importance of and Requirements for Portability... [ read ]

"Recent Judicial and Administrative Changes in Law Could Affect Your Bottom Line"... [ read ]

"Current Trends and State Initiatives: Impact on State and Use Tax Audits" "What to do When a In-State S&U Tax Auditor Knocks on the Door..."... [ read ]

"The Resale Exemption Under Scrutiny in Texas"... [ read ]

"Passive Activity and Hobby Loss Limitations: Withstanding an IRS Attack of Your Client's Outside Business Activities Under Sections 469 & 183"... [ read ]

"The Year of the Taxpayer: A Growing Divide Between Texas Comptroller Policies and Texas Courts is Reflected in Recent Decisions... [ read ]

"Federal and State Tax Considerations for the Sale or Acquisition of a Business in a Rebounding Economy"... [ read ]

"What the Texas Legislature Giveth, Taxpayers and Tax Practitioners Can Take to the Bank"... [ read ]

"What the Texas Legislature Giveth, Taxpayers and Tax Practitioners Can Take to the Bank"... [ read ]

"Texas Tax Following the 2013 Legislative Session: While the Texas Legislature Giveth, Congress May Taketh Away"... [ read ]

"What We Can Expect from the IRS in 2013" "Self-Employment and Employment Tax Issues in LLCs and S Corporatons"... [ read ]

"Selecting a Forum for Challenging Assessments or Refund Denials"... [ read ]

"Using Family Limited Partnerships and What to Expect from the IRS"... [ read ]

"The Texas Comptroller's Office: Current Areas of Interest for Audit and Investigation"... [ read ]

"The Hottest Audit Issues in Texas Tax: Who is Being Targeted For Audit and What Can You Do to Protect Your Client's Interests?" "Texas Legislature Ax in the Face of a Budgetary C... [ read ]

"The Hottest Audit Issues in Texas Tax: Who is Being Targeted For Audit and What Can You Do to Protect Your Client's Interests?"... [ read ]

"Representing Your Clients Before the Texas Comptroller of Public Accounts"... [ read ]

"Texas Legislature Ax in the Face of a Budgetary Crisis: Whose Ox Will be Gored Next?"... [ read ]

"The Legislative and Administrative Search for Tax Dollars in Light of a Budgetary Shortfall"... [ read ]

"The Legislative and Administrative Search for Tax Dollars in Light of a Budgetary Shortfall"... [ read ]

"Don't Give Up on Family Limited Partnerships (FLPs)" "Differences Between Aggressive Tax Planning and Tax Fraud" "The Legislative and Administrat... [ read ]

"Double Whammy -- The IRS Employs a One-is-Good, Two-is-Better Approach in Pursuing Both Taxpayers and Tax Professionals" "Texas Tax in Light of a L... [ read ]

"How CPAs Get in Trouble with the IRS" "Planning Opportunities for Financially Distressed Entities and Related Issues" "Representing Your Clients Before the... [ read ]

"What's Going On at the IRS and How it Affects You" "The Texas Franchise Tax: What the Texas Comptroller and the Texas Legislature Have in Mind"... [ read ]

"Preparer Beware: Circular 230 and the New Section 6694 Penalty" and "The IRS is Currently Auditing Taxpayers Again: What Issues Will the IRS Likely Raise During your Next Audit?"... [ read ]

To Tax or Not to Tax: Should PPP Loans That Are Forgiven Under Federal Law Be Subject to the Texas Franchise Tax?... [ read ]

Among the many issues confronting taxpayers, legislators and the Texas Comptroller related to COVID-19 is whether Paycheck Protection Program (PPP) loans forgiven pursuant to federal law should be subject to the Texas franchise tax.

In a case with potentially broad implications, the Third Court of Appeals recently agreed with the Texas Comptroller that revenues received by a taxpayer from subscription-based satellite-radio programming could be sourced to the location of the subscribers for Texas franchise tax purposes rather than to where the programming actually occurred.

The Texas Supreme Court Holds that the Sale of Military Aircraft to the U.S. Government for Foreign Buyers Could not be Sourced to Texas for Franchise Tax Purposes... [ read ]

In a recent decision involving the apportionment factor for Texas franchise tax purposes, the Texas Supreme Court held that the sale of certain military aircraft to the U.S. Government for ultimate delivery to foreign buyers could not be sourced to Texas, even though legal title and possession transferred in Texas, where the U.S. Government's involvement was statutorily required under federal law. In so holding, the Court disclaimed deciding whether tangible personal property must be sold to a buyer located in Texas or simply delivered to a point in Texas before the sale can be sourced to Texas. See Lockheed Martin Corp. v. Hegar, 2020 WL 2089741 (Tex. 2020). As discussed below, the decision is potentially significant both with respect to what it holds and also what it expressly disclaims to hold.

In one of three recent decisions issued by the Texas Supreme Court involving the Texas franchise tax, the Court held that certain costs associated with the rental of heavy construction equipment could not be included in the cost of goods sold deduction.

The Texas Supreme Court Denies a Cost of Goods Sold Deduction to a Movie Theater Company in a Texas Franchise Tax Case... [ read ]

In the recent case of American Multi-Cinema, Inc. v. Hegar, Cause No. 17-0464 (Tex. Apr. 3, 2020), the Texas Supreme Court held that a taxpayer engaged in exhibiting movies in movie theaters could not claim a cost of goods sold for the costs it incurred in exhibiting its movies. This case, which has been closely monitored by taxpayers and practitioners alike, addresses important questions regarding the definition of "tangible personal property" for cost of goods sold purposes. The Court ultimately concluded that American Multi-Cinema, Inc. ("AMC") did not qualify for the cost of goods sold deduction because it did not sell tangible personal property.

In one of three recent cases addressing the Texas franchise tax, the Texas Supreme Court held that a company engaged in performing work on offshore oil-and-gas drilling rigs could not claim a cost of goods sold deduction with respect to certain costs incurred with that work, but could exclude payments to subcontractors from total revenue.

Texas Comptroller Delays Implementation of New Policy Regarding the Taxability of Medical Billing Services Until After 2021 Legislative Session... [ read ]

This week, the Texas Comptroller issued a potential life-line to businesses that are struggling to pay their taxes in light of COVID-19, but taxpayers should proceed with caution.

COVID-19 May Cause Defaults in Compromise and Settlement Agreements with the Texas Comptroller... [ read ]

Along with the many ails COVID-19 brings to the table is the possibility that it will cause a default on payments due under Compromise and Settlement Agreements with the Texas Comptroller.

On June 21, 2018, the United States Supreme Court issued its opinion in South Dakota v. Wayfair, Inc., et al. In a 5-4 decision, the Court held a state can require out-of-state sellers with no physical presence in the state to collect sales tax on sales of goods or services delivered into the state.

Texas Comptroller Implements a "Tax Amnesty Program," But Is This the Best Option for All Taxpayers?... [ read ]

Starting today, May 1, 2018 through June 29, 2018, the State of Texas Comptroller's Office will run its "Texas Tax Amnesty Program" which offers relief from tax-related penalties and interest for certain taxpayers. But before participating in that program, taxpayers may want to consider whether the Comptroller's existing voluntary disclosure program provides a better option for them.

As the year comes to a close, one additional matter that individual taxpayers may want to consider is whether to expedite any large dollar purchases into this year if sales tax will be due on those transactions.

In a much anticipated decision the Texas Supreme Court today issued its decision in Graphic Packaging Corp. v. Hegar, No. 15-0669, (December 22, 2017). The Court held that Graphic Packaging could not use the three-factor apportionment formula provided for in the Multistate-Tax Compact for apportioning Texas franchise tax, notwithstanding that Texas is a member of the Compact.

The Third Court of Appeals in Agri-Plex Finds that a Business Buyer May Not Be Able to Escape Successor Liability for Hidden Tax Liabilities Assessed After Purchase... [ read ]

On January 19, 2017, the Texas Third Court of Appeals (the "Court") in Agri-Plex Heating and Cooling, LLC v. Hegar found that a business buyer may not be able to escape successor liability for hidden tax liabilities assessed after the purchase occurs. Agri-Plex Heating and Cooling, LLC v. Hegar, No. 03-15-00813-CV (Tex. App.-Austin January 19, 2017, no pet. h.) (mem. op.)). As a result and moving forward, a buyer purchasing a business should be cautious and plan accordingly because it could be liable for taxes incurred by the seller before the purchase but not known or ascertainable by either party at the time of closing.

On December 12, the U.S. Supreme Court denied the petition for certiorari in Direct Marketing Association v. Brohl (Direct Marketing). As a result, the Tenth Circuit's earlier decision in Direct Marketing will stand. In Direct Marketing, 814 F.3d 1129 (10th Cir. Feb. 22, 2016), the Tenth Circuit upheld a Colorado law requiring out-of-state retailers with no physical presence in Colorado to either voluntarily collect sales tax or comply with substantial notice and reporting requirements. At least arguably, the Colorado statute at issue represents yet another attempt by a state to circumvent the physical presence requirement imposed by the U.S. Supreme Court on a state's ability to impose its tax collection obligations on an out-of-state entity.

In a recent decision with potentially broad implications, the Texas Supreme Court held in favor of a taxpayer on a question involving the treatment of capital losses for purposes of the Texas franchise tax.

In a recent decision, the Third Court of Appeals in Texas held that Rent-A-Center, Inc. was entitled to use the .5% tax rate for Texas franchise tax purposes which is generally available to retailers and wholesalers. Rent-A-Center, Inc. v. Hegar, 2015 Tex. App. LEXIS 5865 (Tex. App. – Austin, no pet., June 11, 2015).